SymplexiaLaboratory of Prospecting and Experimentation of New Ideas.
32.1 C
Miami 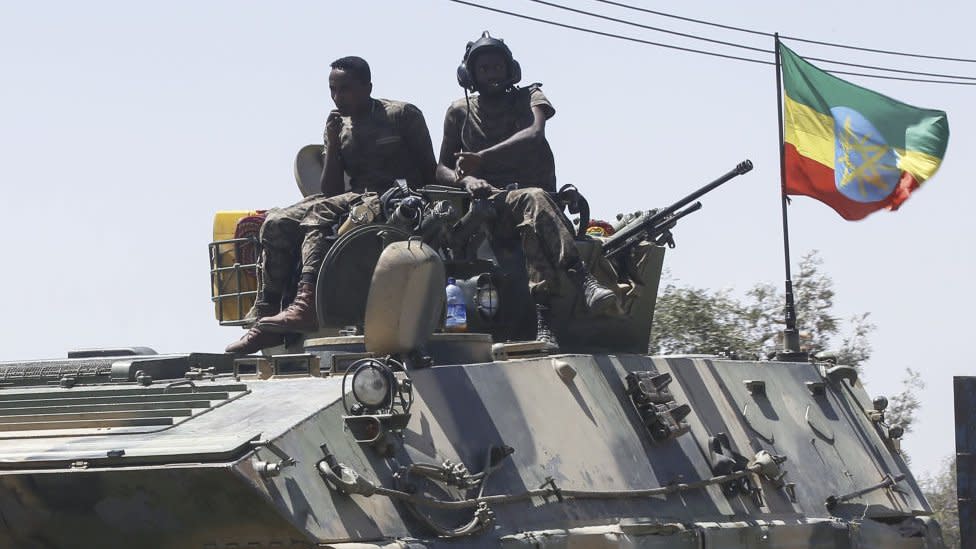 Dozens of people have reportedly been killed or injured after Ethiopia’s air force bombed a market in the northern region of Tigray.

Eyewitnesses told the BBC the Ethiopian air force struck the town of Togoga on Tuesday, 25 km (15 miles) from the region’s capital, Mekelle.

The Ethiopian military denied targeting civilians, saying it carried out the strikes to neutralise “terrorists”.

Tigrayan rebel forces are said to have made advances in recent days.

However, this has been denied by the Ethiopian government.

Thousands of people have been killed and millions displaced after conflict erupted almost eight months ago.

What happened in the strikes?

Doctors at the main hospital in Mekelle say they are treating dozens of people, including a two-year-old child left injured by the airstrike.

Medical personnel told Reuters the Ethiopian military blocked them from reaching the site of the attack to help others left behind.

A 16-year-old boy told the BBC from Aider referral hospital that he was struck in the hand by shrapnel and that he saw several people thrown on the ground. He said that the air strike killed a man he knew.

Ethiopia’s army said the strikes were against military targets.

“We never carried out an air strike on the market place. How is this possible? The army is capable of accurately hitting its targets. We conducted air strikes, but only on certain targets,” a spokeswoman said.

What’s the background to the conflict?

Ethiopia’s government, aided by troops from neighbouring Eritrea, launched an offensive in November last year to oust the region’s then ruling party, the Tigray People’s Liberation Front (TPLF). By the end of the month, it declared victory.

The TPLF had had a massive falling-out with Prime Minister Abiy Ahmed over his political reforms, though its capture of federal military bases in Tigray was the catalyst for the invasion.

The TPLF has since joined forces with other groups in the region to form the Tigray Defence Force (TDF) rebel group.

Speaking to the BBC on Monday after casting his vote in the twice delayed national election, Mr Abiy said he was working with the troops in neighbouring Eritrea to get them to leave but said he would not “push them out”.

They are accused of carrying out massacres, mass rape and blocking humanitarian aid – charges Eritrea has denied.