SymplexiaLaboratory of Prospecting and Experimentation of New Ideas.
32.1 C
Miami

The U.N. voted for the 29th time to end the Cuba embargo. COVID-19 added some drama. 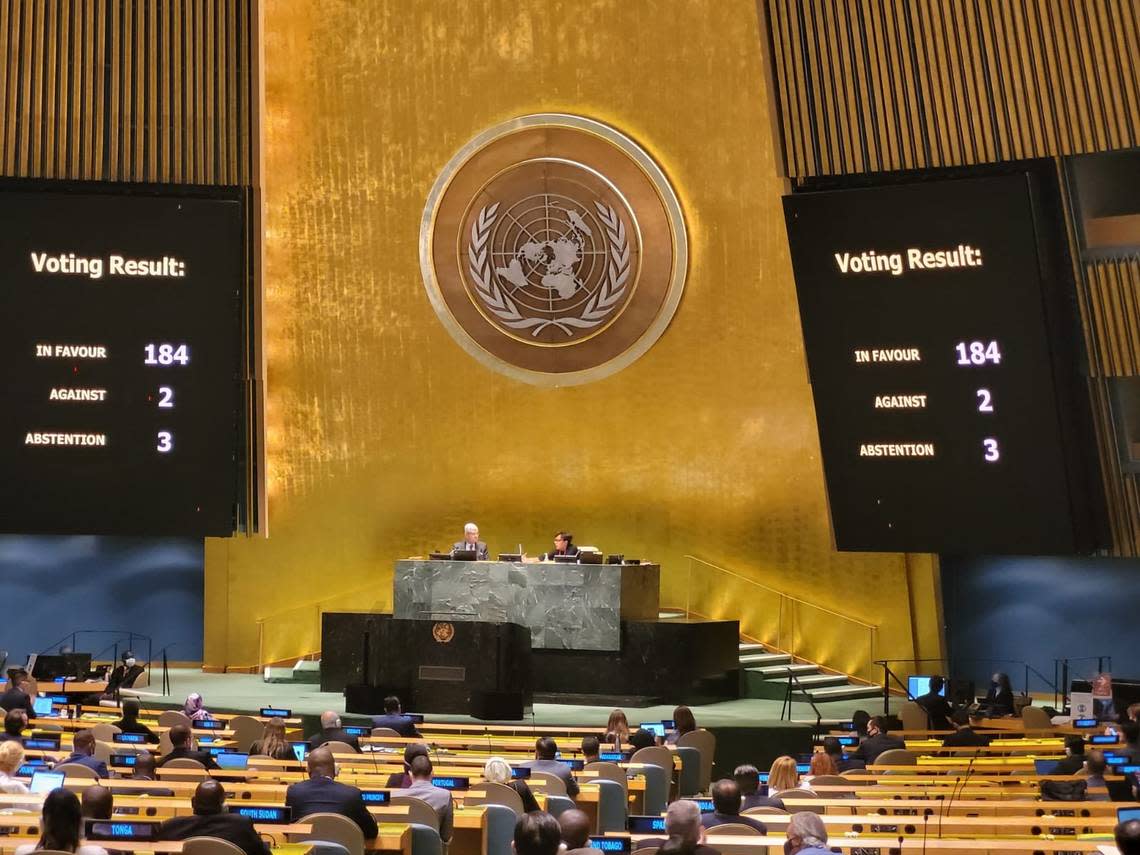 As it has every year since 1992, the United Nations General Assembly voted overwhelmingly in support of a resolution that calls for the U.S. to lift its embargo against Cuba — and this time the pleading focused on the devastating impact of the economic blockade during the COVID-19 pandemic.

The vote on Wednesday was 184 in favor, three abstentions by Colombia, Ukraine and the United Arab Emirates and two No votes by the U.S. and Israel. Member states once again said the blockade goes against international law and the U.N. Charter. Cuba called the embargo “a systematic violation of the rights of the Cuban people.”

“The U.S. government adopted the virus as an ally in its ruthless non-traditional war against Cuba,” Cuban Foreign Minister Bruno Rodriguez told the General Assembly. “This constitutes an act of genocide… Just like the virus, the blockade asphyxiates and kills, and it must stop.”

In opposing the resolution and maintaining the Trump administration’s position, the U.S. defended the use of sanctions as part of a broader effort to advance democracy on the island, support human rights and help Cubans exercise their civil liberties.

“We recognize the challenges the Cuban people face. That is why the United States is a significant supplier of humanitarian goods to the Cuban people and one of Cuba’s principal trading partners,” U.S. diplomat and U.N. mission political coordinator Rodney Hunter told the General Assembly.

Ever since the Cuba-backed resolution was first introduced, U.N. member states have approved it by an overwhelming margin. The most No votes it has ever garnered were four, including those of the United States and Israel, which has always voted in lockstep with the U.S.

The only time the U.S. didn’t cast a no vote was in 2016 during the Obama administration’s opening toward Cuba, when both the U.S. and Israel abstained.

The General Assembly’s last vote during its 74th session in November 2019 was 187-3 with the U.S., Israel and Brazil voting No and Colombia and Ukraine abstaining. The assembly’s 75th session began in September 2020, but because of the COVID-19 pandemic the vote on the Cuba resolution was postponed.

During their remarks, several delegations pleaded for compassion and solidarity during the COVID-19 pandemic, which has created unprecedented hardship for Cubans. Many expressed the hope that the U.S. and Cuba could work together to repair a rapprochement that began under the Obama administration but that was dismantled under Trump.

Rodriguez and several U.N. members said the embargo has cost the Cuban economy around $147.8 billion in losses over nearly six decades, and about $9 billion calculated from April 2019.

Cuba was already struggling with a severe economic downturn when the coronavirus pandemic hit last year, forcing the island to close its borders to tourism, a key source of revenue. The socialist regime was able to keep transmission numbers low for much of 2020 due to strict lockdown measures and close monitoring of its population through its universal public health network. Cuba reported just over 12,000 COVID-19 cases in all of 2020.

But the island opened its borders late last year, COVID-19 numbers exploded, reaching a record 2,055 on Tuesday. Since the start of the pandemic, Cuba registered about 171,000 cases and 1,193 deaths.